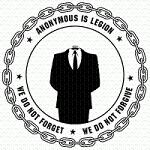 Why care if they see who we are? I sure don't. They'll have a damn hard time finding my full US name and address using just a photo. Even if they do.. if they show up on my doorstep stateside. guess what... That's trespassing, and you know what we do to trespassers in america! YEE HAW!

Seriously. Scientology is a scary cult, yes, but as the recent message to anonymous advised, our advantage is in numbers. They can't possibly slapp sue / maliciously prosecute / slander every single member of anonymous they see. They don't have auditing folders to search through, they would bankrupt themselves hiring PIs... Yes, they will probably follow us around after the protest, but their purpose is primarily to intimidate. If they keep following you, simply walk into the nearest police station. If they're dumb enough to follow, have them detained, telling the cops that they're from the CoS and they're following you. If they aren't dumb, they'll scatter. It's that simple.

Unless your worried they can identify you by a face, don't worry about it. They'll have bigger things to worry about doing all the sec-checks on the handlers they send out. I think it would still be cool to go for coffee or something afterwards, if people wanted, but make sure to make a rule stating: NO IRL NAME... As long as that's followed, we should be safe. Masks are silly, anyway if you want anybody IRL to take you seriously.

Anon is only Anon if you cannot be identified as part of a larger group. Dress as yourself.